Welcome to the first North Coast Football monthly e-newsletter, which NCF plan to produce throughout the year as a way of keeping clubs & supporters ‘in the loop’. There is a lot going on, even though we are deep into the off season, so it’s important we give you as much detail as possible with as much notice as we can so the significant things happening in our zone don’t creep up on us unannounced. When you receive this e-newsletter, please pass it on to your coaches, players, committee members and anyone else you think would be interested. If you know of anyone who would like to be on this list, please let us know and we’ll be happy to include them. For now, here’s what making news around North Coast Football Zone. 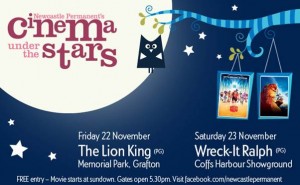 Newcastle Permanent is once again hosting Cinema under the Stars; an outdoor movie night in Grafton and Coffs Harbour. These nights are a lot of fun and are free entertainment for the community. This comes at no cost to North Coast Football Zone and is a very generous gesture from the major sponsor of football in Northern NSW. Hope to see you there!

Yes, I’m afraid it’s that time of year again. The North Coast Football Zone AGM will be held on Saturday November 30th at Woolgoolga C.ex (ie the Bowls club) from 10am. Please note that all clubs are required to be represented at this meeting. 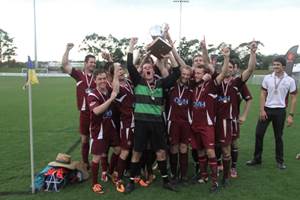 Who could forget Urunga’s famous victory in the Northern NSW State Cup this year? Entries are now open for the 2014 competition and you must act fast. Nominations for the State Cup must be in by Friday December 6th. That’s three weeks from today! Who knows, in 2014 we just might have two NCF teams in the final. Please get your nomination in and let’s keep the Cup on the North Coast! 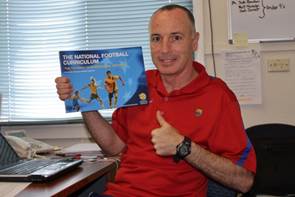 Gary gets his copy of the Curriculum!
North Coast Football opened the mail with anticipation this week as the new FFA curriculum was posted out to members.
NCF Director of Coaching, Gary McGinnis, gave it the thumbs up & has begun working towards its main outcomes through the Skills Acquisition Program and the Game Training program which the NCF rep squads will be participating in. You can download the curriculum here.